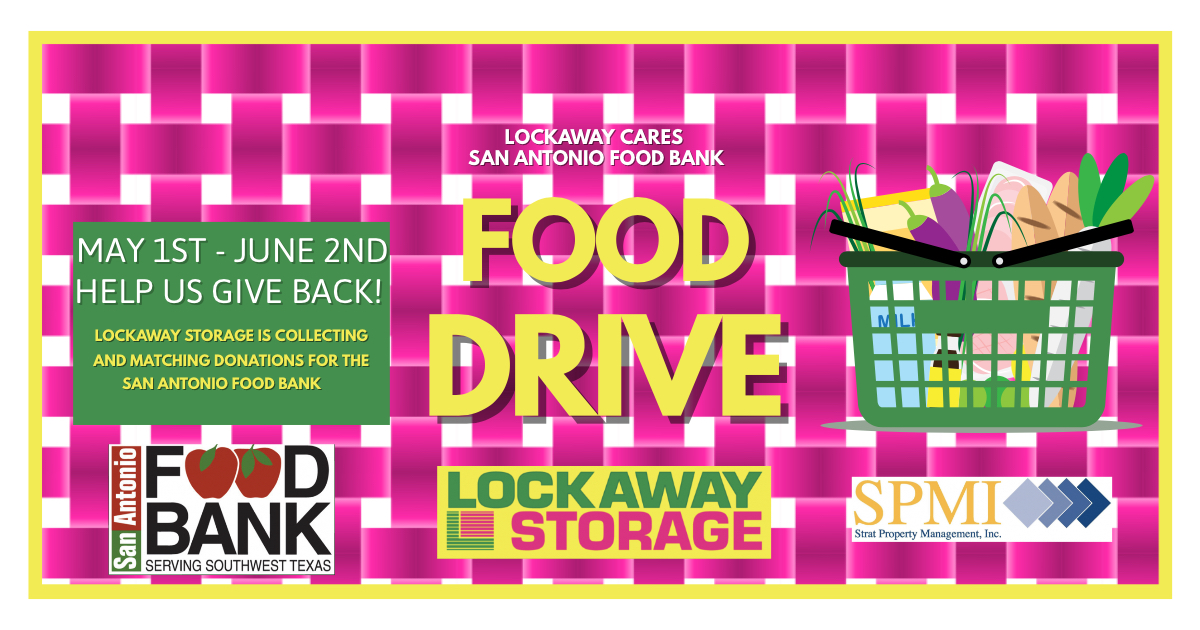 Are you ready to help make a difference in the greater San Antonio area this summer? Let us help! Starting May 1st, we are partnering with the San Antonio Food Bank to kick off the 2nd annual Lockaway Cares Food Drive.

The Food Drive is happening all month long with the capstone Stuff-the-UNIT event taking place on June 2nd at Lockaway Storage on Culebra Road. This event will feature food, music, prizes and more.

You can make non-perishable food and monetary donations at any Lockaway Storage San Antonio location throughout the entirety of the food drive. Talk with your friendly Facility Manager about how you can help us support the San Antonio community.

How it All Began

The idea to have a food drive started last year among a handful of team members. Sedric Hatnot, Facility Manager at Lockaway Storage near Randolph Air Force Base, and his assistant, Marcus Warren, were two of the originators of the food drive idea.

When Sedric first started working at Lockaway Storage, his facility had an issue with low occupancy. He and Marcus brainstormed different ideas for how to raise these numbers, but their early ideas felt flat. They knew they had to dig deeper.

“We wanted people to not just come here, but revamp our theme and the reason for being here. Helping people. Loving on people too,” Sedric said. “A food drive seemed like the perfect way to show people what we’re all about.”

Not long after, all 30 San Antonio area Lockaway Storage locations picked up the idea and made it a company-wide event that same year.

“The first reaction of the employees there, was that they were blown away. They weren’t expecting as big of donations as we had. They even made the comment that the first year a company doing it, it was more than they were expecting,” said Thomas.

The success of last year’s event gave company leaders the motivation and momentum to not only make the food drive an annual event, but to also set the overall goal for donations to be over double than that of the previous year. This year, Lockaway Storage aims to raise donations to provide 100,000 meals for the San Antonio Food Bank.

“I’ve already gotten response from team members like ‘Hey, can I start now?’ and ‘How do we go about doing this?’ I’m expecting a lot more this year. Don set a pretty high goal, but I think we’ll meet it.,” Ashley Montessoro, Human Resources Administrator, said.

Monetary Donations are Just as Good as Food

While many still focus on giving to the Food Bank in the form of perishable and non-perishable food items, Chloe Palacios, San Antonio Food Bank Food and Fund Drive Coordinator, said that cash donations are critical.

“We always push the message that one dollar equals seven meals. Knowing that our overhead is only 2%, so 98 cents of every dollar that we get in goes to what is really important which is our mission of fighting hunger in our 16 county territory,” Chloe said. “For you all to come back and host a food drive for a second year, it really meant a lot to us. Because our mission really falls in line with y’alls mission as a company. And I think that just proves how great this partnership is for both of us. Especially during the summer time.”

The Perfect Time to Donate 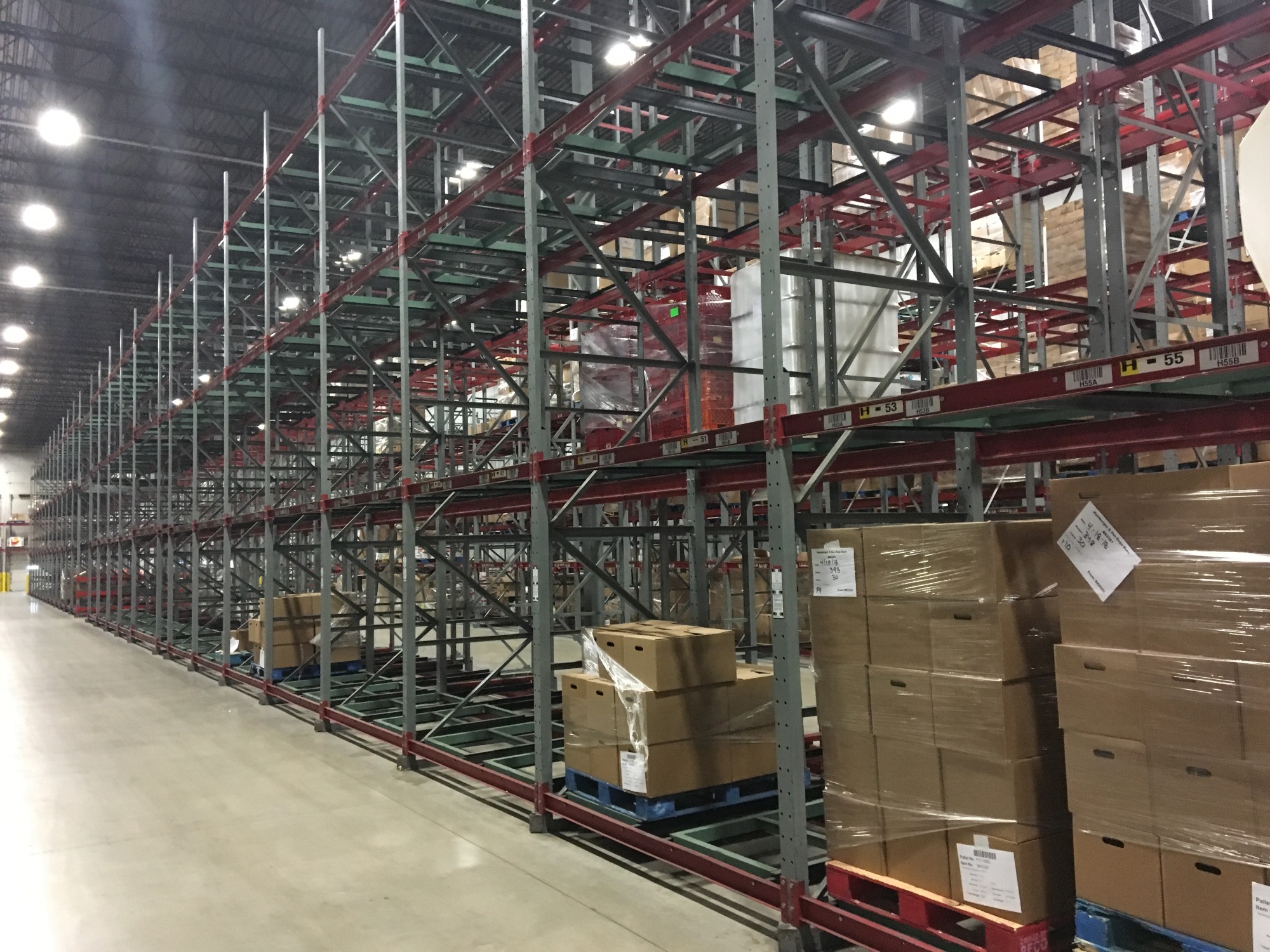 If Lockaway Storage meets it’s donation goals for the 2018 Lockaway Cares Food Drive, we’ll fill every shelf you see in this picture with food.

Thomas said that while volunteering with his team at the San Antonio Food Bank, he saw first hand how great the need for donations is during the summer, “This time of year the Food Bank is in a place where they don’t get a lot of companies donating food, so these racks that are normally full are empty. From now until the end of the summer they sort of struggle to get the amount of donations that they need.”

Most people think about donating food for the holidays during cold weather months. However, more than 200,000 children in San Antonio are at risk of going hungry during the summer months, because they don’t have access to free and reduced breakfast and lunch at school.

Chloe explained how this ends up putting a lot of stress on the family unit, ”During the summer we work really hard to make sure that families’ pantries are stocked and their table is set. And by Lockaway Storage hosting this drive in time frame that you are, it kind of helps us prep for that summer time. It’s like the perfect time. It’s like the perfect scenario for that drive to take place.”

One such family who was able to benefit from the San Antonio Food Bank years ago happens to include someone who was a catalyst for getting the Food Drive started at Lockaway Storage.

“My mom and my dad, you know growing up, I believe my dad got a box full a couple of times. We were able to eat and have something for a couple of weeks until my dad got paid,” Sedric said. “When I was a kid it helped me. So that’s why I’ve always wanted to do this.”

Sedric’s dedication to giving back to the community through Lockaway Storage has helped define our company as not only a great place for storing belongings, but an asset to the communities surrounding it. We are so excited to have all the San Antonio area Lockaway Storage facilities on board for this year’s food drive. We know this is going to be a fantastic summer for the San Antonio Food Bank!